Book Review: How to Survive the Apocalypse

Zombies, Cylons, Faith, and Politics at the End of the World 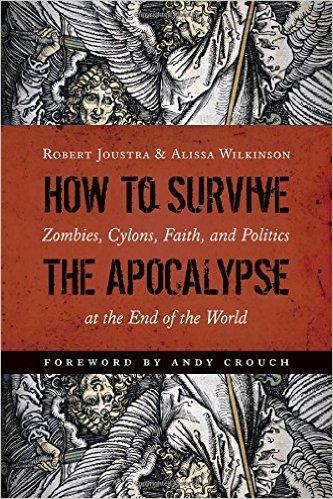 How to Survive the Apocaplypse: Zombies, Cylons, Faith, and Politics at the End of the World

If you are looking for a quick read to spice up your latest sermon series on eschatology, this book is not for you. If you want an end-times thriller (a la Left Behind), skip this book entirely. If you’re a prepper seeking practical survival strategies for the doom-and-gloom-sure-to-come, definitely keep looking. But if you’re looking for some thoughtful Christian reflection and interaction with the current cultural fascination with all things apocalyptic, this book is worth a read.

Early on, the authors reference the strange world of apocalyptic images in the Bible, including weird creatures, a bottomless abyss, angels and demons, fierce battles, and odd mathematical calculations that have some hidden meanings. And then they state: “And how can we begin to understand this world? It’s easy. The movies and television shows we watch every week are saturated in just those things.”

From that point, they give a quick overview of how our culture meandered to its current modern ways of thinking (“the Secular Age”) and also attempt “A Short History of the Apocalypse.” From there, they discuss how apocalyptic (or more accurately, pessimistic dystopian) stories now dominate the big and small screens.

In current movies and shows, the world is coming to an end or we are on the other side of some epic disaster and the world is trying to rebuild, and so forth. So, in the book we get a wrestling with the meanings and messages of:

And the authors summarize many more current movies and TV shows with apocalyptic themes, antiheroes, dystopian scenarios and cautionary tales. The authors then connect all this content with some serious biblical and theological reflection, while leaning heavily on the works of philosopher Charles Taylor.

Finally, the book attempts to forge a positive way forward for Christians by pointing to the prophet Daniel as a model for being a faithful presence in our modern-day Babylon.

So, here are my top six random musings on this book:

Quintin Stieff is lead pastor of Valley Church (EFCA) in West Des Moines, Iowa—husband to Ruth and father to three 20-something millennials who grew up during the rise of apocalyptic zombie stuff.

With the subtitle Zombies, Cylons, Faith, and Politics at the End of the World (enjoyably playful), I thought I had an idea of what to expect. But the authors quickly let readers know that How to Survive is more or less a “critical meditation” on two of Charles Taylor’s works: The Malaise of Modernity and A Secular Age.

While the book succeeds somewhat with its aim to be an “accessible introduction” to Taylor (Taylor’s dense thought does need some unpacking), the writers assume a level of political/philosophical sophistication in the reader that goes beyond a mere introduction. If you don’t have at least a college 101-level working knowledge of political philosophy, you might want to skip this book.

So, why would an EFCA leader want to read it? Among many reasons, I believe the book can be a real eye opener in revealing why there is so much political dysfunction in our culture, and help explain the resulting frustration and cynicism we see, especially from so many in the millennial generation.

The writers do a good job of showing that when a culture no longer has a shared moral horizon (i.e. a mutually submitted-to worldview), then our government and politics increasingly become more about power and control rather than about a flourishing of the common good. Their parsing of the film The Hunger Games reveals why there is so much anger toward “the establishment”: Many average citizens intuitively feel that they “are not people; they are tools for the Capitol to keep itself supplied, comfortable, and entertained. This is instrumentalist, this is tyranny.”

Pastors often lament the statistics of young people leaving the church (and not just millennials). After all, the church is seen as “the establishment” by many. Reading How to Survive will help you see not only why (young) people seem to be leaving the church but also why, ironically, it is in their best interest to “dig in and do the hard work of institution-building.”

The book persuasively encourages each of us to light a candle rather than curse the darkness.

Bob Manuel is co-pastor of CrossWay Community Church (EFCA) in Grand Rapids, Michigan. He had previously watched an episode or two of “Breaking Bad” and says, “After reading How to Survive an Apocalypse, I would be inclined to watch 'Breaking Bad' again, if only because I never considered it to be in the apocalyptic genre. It's good for me to get some insight into what people are watching/reading, so I can help them engage in a spiritually healthy way.”

Two buckets, each holding 120 pre-packaged meals. That’s what I recently loaded into our minivan as we left to return from vacation. “Just add water,” my friend said. “They’ll last ya 25 years without going bad.”

He was trying to get me ready for what he believed just might be America’s impending dystopian future—whether caused by massive civil unrest, an electromagnetic pulse bomb . . . or something worse, something otherworldly. Truly: My friend is actually, actively preparing for the end of the world.

Professors Robert Joustra and Alissa Wilkinson wrote their book to do the same: to prepare us for the apocalypse. Their approach, however, is less Swiss Army Knife and more Encyclopedia Britannica.

Drawing heavily—very heavily—from Canadian philosopher Charles Taylor, they show that apocalyptic art not only portends the future but also, perhaps mainly, reveals who we are now.

The first several chapters provide philosophical and historical background. Then they move to cultural reflection. We learn about ourselves from shows like “Battlestar Galactica,” which is where the word cylon in the subtitle comes from. We learn from the antihero main characters in television shows like “Breaking Bad,” “Mad Men” and “House of Cards.” And we learn what living among the undead teaches about us in “The Walking Dead” and the movie World War Z.

In the final chapter, the authors offer lessons from the prophet Daniel, not chiefly from his spectacular visions of the future but from his faithful courage and strategic compromises while living in Babylon.

First, the book belongs on the “top shelf.” On the one hand, the title is provocative (almost borderline clickbait), the prose smooth (even spicy at times) and the subject matter apparently pop cultural. Yet, trust me, the tenor is decidedly academic in what it assumes of readers.

Second, the book doesn’t necessarily help you determine what to watch. In Chapter 1, the authors state their desire: to persuade readers (among other things) “to turn on the TV and believe it can prod [us] into making culture a better place.” But for me, and likely many others, the potential payoff from thoughtful engagement with media must also be considered in light of the potential corrosion from this same media.

Before you call me a prude, recognize that we all have “a line.” No Christian (I hope) is arguing that whatever we might learn from, say, Fifty Shades of Grey is worth it; but maybe it is for The Hunger Games? Yet where should we place “Mad Men” or “Scandal” or “Breaking Bad”? The book could have been improved by helping us learn to make this decision rather than assuming the answer for us.

I’ll just speak for myself, but I need an explanation as to why I ought to watch Game of Thrones, which, in my understanding, is not a stretch to call soft-porn.

These considerations aside, I will recommend How to Survive the Apocalypse, but only to a special person—one who will not be lost at the hemispheres of the philosophical and the popular. For those who can keep up, the book has much to offer.

Benjamin Vrbicek is a teaching pastor at Community EFC in Harrisburg, Pennsylvania. He and his wife, Brooke, have five children. He earned an M.Div. from Covenant Theological Seminary. Benjamin blogs regularly at Fan and Flame and you can follow him on Twitter.