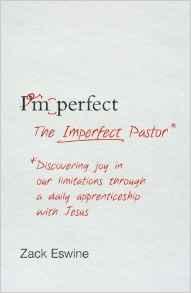 The Imperfect Pastor: Discovering joy in our limitations through a daily apprenticeship with Jesus

It is not uncommon for pastors to feel the need to prove themselves through ministry “success.” What our culture celebrates and rewards—blogs, podcasts and book deals, prestigious pulpits and speaking invitations—can give the average pastor the impression that what matters most in ministry is size, speed and span of influence.

Enter Zack Eswine and his book The Imperfect Pastor. Building off his previous book, Sensing Jesus, Eswine speaks from his own pastoral brokenness to act as a sage counselor for success-sick pastors.

The book’s basic argument is that while the world will tell pastors to do “large things in famous ways as fast and as efficiently as you can,” ministry is actually about doing “small, mostly overlooked things, over a long period of time with [Jesus].”

Eswine notes that the temptations pastors face—to be everywhere, know everything and fix everything, and all as fast as possible—are in effect an idolatrous attempt to be Christ. He encourages pastors to remember that their limitations are God-designed and that they are called first and foremost to love God and love the people and the place to which God has called them for the long haul.

Just three years into my first pastoral position, The Imperfect Pastor was a providential read. It was convicting because it revealed how I have tried to meet unrealistic expectations. Yet it was also refreshing because it gave me hope for a sustainable, and more biblical, ministry.

I do have two small critiques. First, Eswine’s writing is often quite poetic, which at times clouded rather than contributed to his point. Second, I would like to have seen more specific advice for struggling pastors. How does a pastor communicate his limitations to his congregation? How does he deal with the unrealistic expectations of others? How does the ordinariness of ministry affect his day-to-day responsibilities? What is the line between embracing limitations and slothfulness in ministry?

Addressing questions like these would have strengthened the book.

John Biegel is pastor of spiritual growth and discipleship at Riverstone Church (EFCA) in Yardley, Pennsylvania.

If you had asked me 16 years ago when I started in vocational ministry to pick the perfect pastor to sit under in a mentoring relationship, I would have rattled off the big names of Christian academia. Ask me that question today and I answer much differently. Let me sit at the feet of one who is a broken pastor captured by the grace of Jesus.

Time and again, author Zack Eswine presented me with great pastoral questions for my heart and for the hearts of the pastors and elders of the church I serve. For example, he asks, Do I possess the stamina for going unnoticed? Can I handle being overlooked? Do I have the spirituality that equips me to do an unknown thing for God?

Ouch, who asks these kinds of questions?

This is the best book I have read on pastoral theology over the last few years.

Finally! Someone wrote a book about me! That was my thought as I picked up The Imperfect Pastor. How wrong I was. Eswine has written a book about the kind of pastor I want to be.

The Imperfect Pastor is written in four parts. The first looks at a pastor’s calling, what lures a person into ministry. A person’s desire to do great things for God is a normal motivator. The problem is that most of us have a poor understanding of what God considers great.

In parts three and four we’re led into healing in our own spiritual life and our ministry.

I read a lot of books in 2016. The Imperfect Pastor has been the most helpful. The imperfect parent, imperfect elder, imperfect teacher and imperfect boss would all benefit from this book.

Drew Arliskas is lead pastor of Mountain Vista Bible Church (EFCA) in Mesa, Arizona, and a member (former president) of his local chapter of Sober Riders.

John Biegel is one of the pastors at Riverstone Church (EFCA) in Yardley, Pennsylvania, and serves on the Eastern District Board of Ministerial Standing. John has an M.Div. from Cairn University School of Divinity and is currently working on a Th.M at the same school, writing his thesis on a marvelously obscure eighteenth century Scottish theologian. John and his wife Michelle live in Levittown, Pennsylvania, with their three young children.

Episode 116: Shepherding God's Church: The Privilege of Being a Pastor by Dr. Bill Kynes