The depth to which child sponsorship has changed a life. 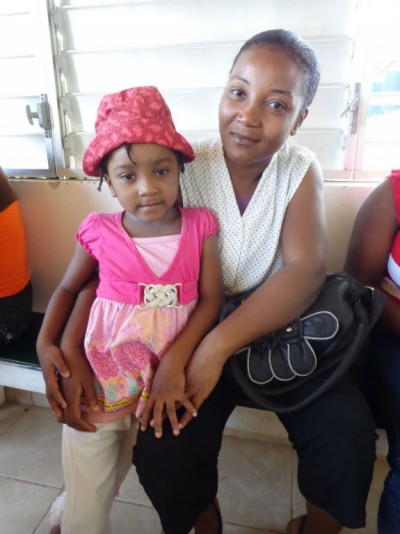 Angeline Henry is a beautiful 5-year-old who lives in a 10-by-10-foot hovel in downtown Port au Prince, Haiti. Until last year, she had never visited a doctor. Had she not seen one of the EFCA GlobalFingerprints doctors in February 2014, she may not have lived to see her next birthday.

GlobalFingerprints* is the movement’s child-sponsorship program, operating now in six countries. Angeline has been sponsored since December 2013. As part of the program, health professionals perform twice-yearly wellness check ups on all sponsored children (currently, 270 in Haiti and 2,416 worldwide).

During Angeline’s February 2014 check up, Drs. Stephen Valder and Dean Kaihoi learned of her lack of appetite and constant fatigue. Her situation piqued their interest even more, because Angeline’s twin sister showed none of those symptoms.

After a more detailed exam, an anomaly was detected in Angeline’s heart, requiring further exams. Through a partnership between EFCA ReachGlobal and Haiti Health Ministries, Angeline was seen and examined less than two months later by visiting heart specialists (no small feat in this country).

The exams confirmed that Angeline was suffering from a serious cardiac condition—severe pulmonary stenosis with suprasystemic pulmonary artery pressures—which could prove fatal without surgical intervention. Yet this surgery was not available in Haiti. Fearful of the surgery, Angeline’s mom passed up an offer for her daughter to be flown to South Korea for the necessary surgery. For months she wrestled with what to do.

In November 2014, a team of cardiologists from another ministry, Haiti Cardiac Alliance, examined Angeline again. With her daughter’s condition worsening, Angeline’s mother finally understood that surgery was needed immediately.

Cardiologists from the Alliance opened the doors for emergency surgery in the Cayman Islands. Haiti’s largest cell-phone company then loaned its private jet to fly Angeline and three other needy Haitian children to the Cayman Islands, at no cost.

Somehow, in less than two weeks (remember, we’re talking about Haiti), Angeline’s exams, documents, passport, transportation, financial backing, hotel, hospital, doctors and surgical team were all organized and approved. And in December, Angeline traveled with her mother to the Cardiac Alliance Hospital, where she underwent the needed “balloon pulmonary valvotomy.”

Angeline and her mother, Marie Rosena Serant (at left), join other families on a flight to the Cayman Islands for needed medical procedures.

In the months immediately following Angeline’s surgery, her recovery surprised almost everyone. Her energy and weight have increased, she has fully returned to school, and she has developed a voracious appetite. The joy and playfulness of a child has also returned, and Angeline is again laughing and playing jump rope with her sister.

So that’s Angeline’s story: a story that began with a little girl’s heart but is really the story of God’s heart and the hearts of others who love Him and who respond to His call to care for His children.

Consider joining ReachGlobal for one of its twice-yearly medical weekends in Haiti: May 15-18, 2015, and November 17-22, 2015. For more information, contact the author.

*Read more about GlobalFingerprints in the spring 2014 issue of EFCA Today.